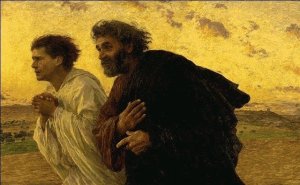 As we get closer to Easter, I’m reminded of a post I wrote about two years ago, on my previous blog.  I thought I’d share it with you as we look forward to this Easter.

When I think of Easter, I remember Mayo Kikel.
Mayo was one of the first teachers I met when I visited Jesuit High in Tampa the Spring prior to starting work there in 2002.  She impressed me with her conviction that God wanted her there.  She could easily have worked at a school closer to where she lived, but instead she made the extra long trek to our school each day.  I have only met a few teachers like her, so convinced that they were fulfilling a mission.  When I began work at the school the next Fall, she quickly became one of my favorite colleagues.
This made it all the more difficult when she was diagnosed with breast cancer.  We were already to chip in and fill in for her wherever needed.  But, amazingly, even after she started the cancer treatments, she never missed a single day of work.  It was what she lived for.  And though it left her with little energy to do much else, she came back day after day.  None of us would have faulted her for taking a day off, much less complaining, but she rarely did.
As Easter approached, she came to ask me a favor.  I was the Director of Campus Ministry and was in charge of the program for our once-a-week morning convocations, when the whole school gathered in the chapel to begin the day.  She told me how good the boys at the school had been to her, and she wanted to use the convocation just before the Easter break to thank them.  What she wanted to do, she explained, was to sing a song, an Easter song.  Now this was not without its risks.  Such an endeavor at a school of some 650 boys was just as likely to invite ridicule, as it was reverence.  We talked about this, but she was determined.  So we made plans.
When the day came, I stood up at the podium and said, “Mrs. Kikel has told me how wonderful you all have been to her during her illness, and she asked if she could do something to thank you.”  The music began.
The song she sang was told from the perspective of Peter, beginning with a Peter all too aware of how he had failed Jesus.  And, now that Jesus was dead, there would be no opportunity to make amends.  Then it took up where our Easter Gospel reading began, with Mary come to announce that Jesus had been taken from the tomb.  Peter runs to the tomb, John running up ahead.  They find the burial cloths set aside, and Jesus missing, and they begin to realize what has happened.  In the song Peter exclaims, “He’s alive!”  “He’s alive!”  “He’s alive and I’m forgiven.  Heaven’s gates are open wide!”  “He’s alive!”  “He’s alive!”  The song built until Mayo sang out the final, “He’s aaaalive!”  And then something happened which even now when I think about it inspires tears.  Immediately and without hesitation, every boy in that chapel stood up and applauded.
We speak a lot in our Jesuit boys’ schools about being “men for others,” and I have yet to see a better example of that than I did on that day.  When we speak about Easter, we speak about everything being made new because of what Jesus did for us, and because God raised him from the dead.  Things were made new for me that day.  No matter what they did after that day, I could never quite see those boys in the same way again.  They had stepped up when it was most important.  And I can never think of Easter without thinking of Mayo Kikel who because of her humility, faith and courage was able to inspire such a moment.
Mayo beat the cancer, but was stricken just a couple years later with a rare disease which took her from us.  But I will never forget her.  Few people in my life have exemplified as well as her what Easter is all about.