Today’s first reading tells the story of Susanna, from the book of Daniel.  Two old men corner Susanna as she was walking through the garden, and demand sex from her.  Should she refuse, they tell her, they will publicly accuse her of having sex with another man—not her husband—and she will face a penalty of death.  Susanna chooses to take her chances with their false accusations, rather than submit to their demands.  She will almost certainly die, but prays to God for deliverance.  God sends Daniel to rescue her, and expose the men’s lies.  The men are then delivered to the same fate that they would have visited upon the innocent Susanna-death. 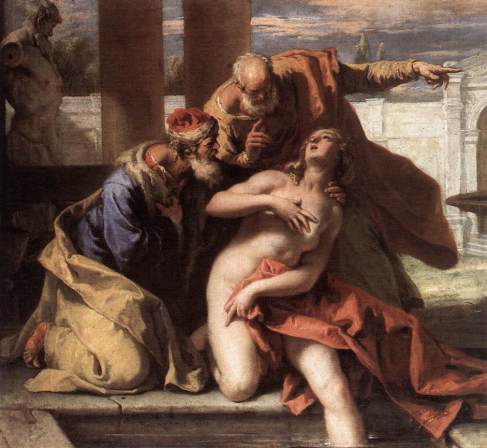 I couldn’t help but think, given the coverage of the rape trial in Steubenville, OH, what the reaction would be should the priest presiding at mass choose to preach about what a shame it was that the old men suffered as they did, with no thought to what they had done to Susanna.  That, essentially, was the perspective adopted by news agencies such as CNN in their coverage of the verdict in the Steubenville trial.  It was all about how the lives of the two young men found guilty were being ruined by this verdict, and the punishment that went with it.  There was almost no mention of the victim of the rape, and nothing in the way of sympathy for her suffering, how her life had been ruined.  And, while I certainly cannot be without sympathy for the dire consequences these men’s actions have led to, the lack of any sympathy expressed for their victim was more than disturbing.

I did not have the opportunity to preach today, but I would have felt myself remiss had I not made that connection, and I hope that some priests today had the courage to do so.

Indeed, when the story of Susanna comes up and the readings, as well as the story of the woman caught in adultery in yesterday’s Gospel, I can’t help but remember an “angry mass” that I experienced in my first year of priesthood, when both readings came at the same mass.  I wrote about it then:

As I considered what to say in my homily this morning, I realized that there was no way around it–today’s readings definitely had something to say about injustice against women. To avoid the issue, as some might have, seemed to me to be ignoring the elephant in the room. Today’s readings clearly had something to say to use about gender justice, and the injustice perpetrated against women by abuse of power and sinful double standards. That’s what I spoke about in my homily. I admitted that I myself haven’t exactly been the best advocate of gender justice, and have been known to roll my eyes at academic discussions of the evils of patriarchy, but that it was clear in these two readings that gender justice is something we are meant to be concerned about. We are called, like Daniel, not to stand idly be but to speak up when we see injustice being perpetrated against women. And, we are challenged by Jesus to examine the ways in which our own attitudes and opinions ignore such abuses of power, and conform to sinful double standards. And while we can often point to more egregious examples of injustice and violence against women in other countries, that shouldn’t prevent us from recognizing that there is plenty happening here, right in our own communities.

Honestly, this was a bit out of my comfort zone, and so I was pretty nervous. I wasn’t sure how people would react. I was pleased with the homily, though it took a lot out of me. And, as I reflected for a few moments afterward, I was confident that what I had said indeed reflected God’s concern.

And that was why I was so appalled and angered by the prayers of the faithful! Now, they come from a book which the parish bought, so no one there is to blame, but I couldn’t believe that after I had said all that, the first prayer was for “our bishops, priests, and deacons.” And it only got worse. There was not a single mention of women, never mind injustice against women. I wanted to scream! Instead, I did the more genteel thing, and added my own prayer at the end for women who are victims of sexual abuse and violence. I wonder if I should have said something more, but I always want to be careful not to distract people from the liturgy of the Eucharist (and I’d already said quite a bit). And, hey, I’m saying something more now.

But I was distracted, and I wondered if people noticed that I was angered by how the prayers had indeed managed to ignore the elephant in the room. I couldn’t help but wonder if that was a deliberate omission, and whether the people who wrote the prayers had considered how out of sync that first prayer was likely to be with many a homily today. Sometimes at mass I’m taken by how well the prayers, usually written independently of me, fit with the subject of my homily. And sometimes when they don’t, I wonder if I missed something. But today was the first time that I felt the prayers didn’t seem to get it at all; that it wasn’t me who missed something . . .

These news reports coming out of Steubenville certainly missed something, and they should be ashamed.