After a pretty busy February spent giving talks and retreats in various places, I’ve finally reached my Spring Break vacation, of sorts.  I’m about halfway through my week in L.A. which has been a great time to reconnect with family and friends and prepare myself for what promises to be the somewhat overwhelming experience of my first Los Angeles Religious Education Congress, which some refer to as “Catholic Disneyland.”

My brother lives and works here as the Art Director for the show Parks & Recreation (my mother was somewhat taken aback a couple of years ago when he said his new job was with Parks & Recreation!  She hadn’t heard of the show.)  I spent the first part of my trip with he, his wife, and their three children.  They have twins–a boy and a girl–who are, as my nephew repeated more than once, “6 and three quarters” years old, and another four year old daughter.  The weekend was a reminder of the pros and cons of family life, as we moved from one sporting event to another.  There was T-ball with my nephew, where I was drafted as a third base coach, and practice for the two girls’ soccer teams that my brother coaches.  One of the Moms asked me, “Has he always been so wonderful with kids.”  And while this was the first time I’d seen him coach, I had to admit that he’s pretty darn good!  I’m also proud to see what a great father my little brother has turned out to be!  Saturday was soccer practice, and Sunday was the soccer games, and I had the joy of seeing my youngest niece score a goal!

It was a bit of a surprise, because just minutes before she didn’t seem so into the game!  This was true of most of the girls on the team, whose interest seemed to wax and wane throughout the game.  Sustained competitive intensity is probably not so a common a trait for most four year old girls.

While all this was going on, I also provided entertainment–some voluntary, some not–for the niece and nephew who was not playing at the time, at one point simultaneously pitching balls to my nephew and kicking the soccer ball with my niece.  It was wonderful to spend time with them, as I don’t see them as often as I’d like, but also exhausting!  A reminder that I really need to get into shape!

I also had a wonderful dinner last night with my friend TerriAnn, who asked if she could bring her boyfriend, Ronnie Kovic, along.  I wrote back to her that I would be delighted if he could come and, isn’t his name the same as the guy from Born on the Fourth of July?  Not only was it the same name, but also the same guy!  It was wonderful to see TerriAnn, who I always visit when I’m in L.A., and to meet Ron, who is a lovely man, and who doesn’t look anything like Tom Cruise! 🙂  It was a privilege to meet a man who has really struggled with great hardship in his life, but has now achieved such great peace.  And he an TerriAnn are such a lovely match. 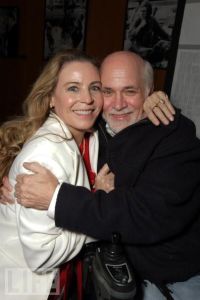 We talked for hours, about all sorts of things.  Ron quizzed me on what I’ve been doing, I of course asked him about his experiences (and since I’m a movie nut, it was also exciting to be sitting with a Golden Globe winner!), and I got caught up with TerriAnn, who I hadn’t seen since my last visit to L.A.  How wonderful it was to see my friend, who lost her husband some years ago, to be so happy with someone new!  What a blessing.

All this is a prelude to the L.A. Congress which I hope will be an enriching experience, and also an opportunity to spread the news about my book, and to see a lot of friends and colleagues from around the country who I don’t get to see as often as I’d like!  I’ve also volunteered to be available for Confessions, which is always such a great privilege.

If you’re coming to the L.A. Congress, look for me at the booths of the Jesuits, Charis ministries or Saint Anthony Messenger Press (where you can also buy my book!).  I’ll report more on the Catholic Disneyland experience in a future post!

At her blog, Everything is Holy Now, my friend Becky shares about one of her favorite parts of Already There:

“For me, Mark’s words were both an affirmation and challenge. He affirmed the call I feel to belong to a community, and he challenged me to look at my understanding of community in terms of my Catholic faith. The reality is my faith life would have remained static if it was not for the community of friends and ministry colleagues who continued to foster my faith life by their examples, by their knowledge, and by their support. These people, along with my family, are concrete reminders of God’s presence in my life.”

I am grateful for her comments, and I recommend checking her blog out. She always writes insightful and thoughtful posts, expressed beautifully. One of my favorites of her recent posts is “Holding in a Laugh.” Mainly, because I want to go to the world of fuzz!

“South Carolina” is the answer to the question I’m often asked: How did I guy from Massachusetts end up a Jesuit in the New Orleans Province? The summer after I graduated college I worked at a summer camp in Western Massachusetts, where I worked with several young women from South Carolina. I think they were the first people from there I’d ever met. There was something about them, and how they spoke about the place that fascinated me. So, later that year, when I was applying to graduate schools, the rather strange possibility of applying to the University of South Carolina seemed a little less strange.

I know it might seem funny, but my decision to apply to USC was influenced by what might otherwise have been an overlooked “personal touch.” I was applying to grad schools from out of the country, and didn’t have a fixed address. The newest information catalogue was not available, but instead of sending me a form letter, or not responding at all, someone had taken the time to write me a personal note asking me to let them know what address to send the information to me, when it became available. Still, as the acceptance—and rejection—letters came in, my best offer was from Catholic University in Washington, and it seemed I was going there. But, I thought, I had nothing to lose in writing the other places I had been accepted, and seeing if they had something more to offer. I got only one bite. USC offered me a teaching assistantship, which was exactly what I was looking for.

So, South Carolina became the first place that I lived on my own, far away from home. My first friends were the other students in the program, many of whom I liked very much. But I also felt the pull of my spiritual roots, and started getting involved at the Saint Thomas More Catholic Student Center. There I met several friends who, though now we’re scattered all over the country, I still keep in touch with. I also felt another pull back to youth ministry, which led me to a local parish, and a deep, abiding friendship with a group of people who continue to be some of my closest friends. And, because they were “locals,” many of them having grown up in South Carolina, and because they continue to live there, which (sadly) I don’t, South Carolina is a special kind of home, which I try to get back to with some regularity. I write about my experience in South Carolina in my book, Already There:

“I enjoyed my activities at the university’s Catholic center, but I also felt God stirring that desire to give retreats to or teach high school students,as I had done in the past. I arranged a meeting with the youth ministry director in the parish. Remarkably, she already had six people who had volunteered to help that year. I was excited by the prospect of working with such a large team. She, on the other hand, as she admitted to me only some months later after we’d become close friends, had been prepared to suggest I try another parish, since they already had more help than they needed. But we hit it off almost immediately, and when I told her about my desire and my past experience, she couldn’t say no. A few years later, she was one of the first people I told of my decision to apply to become a Jesuit, and the first I asked to write a recommendation for me.

The result was a dream team of sorts. We eight became fast friends and quickly discovered how well our skills complemented one another’s in our work with the parish’s youth. The youth program not only grew and improved, but so did we, because of our care for the young people of the parish and each other. The total impact on my life seems disproportionate to the amount of time it lasted—only about two years. It was an experience of friendship and community I continue to cherish, I’ve carried the picture of the eight of us in all my moves since then, even though that experience could not be sustained. One man was in the army and was transferred, one woman got married and moved to another state, one could no longer find the time, and two of us felt called to answer the need for a youth ministry director at another parish.

Such times, such friends, are great gifts, even if, inevitably they can’t be beside us forever, let alone a few years. By drawing out the best from us, they directly contribute to our becoming what God desires us to be. These were, and continue to be, some of the best and most important friends I’ve had in my lifetime. When I was ordained a priest in New Orleans, after celebrating Mass with friends and family, my next stop was South Carolina. I needed to be with my friends there because, though I had gotten my training from the Jesuits, these were the people who had inspired and nurtured my gifts and my desires in such a way that being a Jesuit and a priest became a real option for me. There’s little coincidence in my mind in the fact that four of them were with me that day, listening to the same priest talk, when God placed the question in my mind, “Why aren’t you doing that?” In our work together, and in our care and love for each other, they had already, in a sense, asked me the same question.”